A Keeper of "Shocking" Secrets 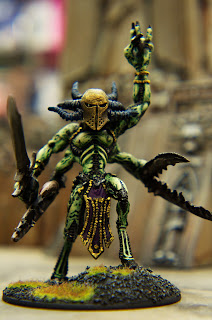 Around this time last year, I was snowed-in for a long weekend.  After fighting with my snow-blower for a few hours, I tried to warm up at my work bench with a bottle of whiskey; this Greater Daemon of Slaanesh was the result.

Having created a Keeper of Secrets model in the past for my Emperor's Children, I was a bit pessimistic about making another one.  The kit that I had to work with this time, only came with the "squid-face" head, which I had sworn never to use.  That said, I began rummaging through my bits for a suitable replacement.  Not finding a suitable replacement, I decided to find a creative way to use what I already had...

What I wound up doing with the head, was pinning it on upside-down and backwards, pinning the horns on backwards, and for a face, mounting a metal mask from the Defiler kit.  While not as cool as the "goat head", this conversion made my Keeper of Secrets stand out from my Emperor's Children version in more ways than just color scheme.  Crappy and hurried cell phone pic for comparison: 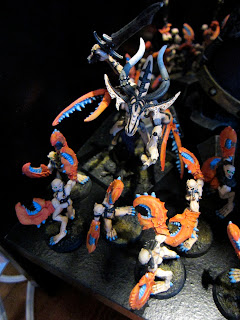 As I dry-fitted the rest of the kit together, I noticed that all of the joints were quite similar.  With my pin vice and some putty in mind, I began to see a variety of poses just aching to be explored.  The one real challenge to re-posing the model, was that one of the daemon's hands was pointing.  My original Keeper was in the standard pose, pointing straight ahead, so that was not an option.  Rather than simply have the model pointing up or down, I decided to do a bit of creative direction.

I bent one of the fingers straight, and completely cut the pinky away.  I then drilled out the knuckle area, made a pinky bone from a bit of wire, and fleshed-out the new pinky with putty.  I added a tiny claw once the finger's putty had set.  The end result, is a fairly convincing hand, making a very Slaaneshi gesture.

After re-posing the legs and giving the left "stepping-up" leg something to stand on, my model had really taken on an image quite separate from the original.

About four hours of blizzard, booze and blisters, gave rise to this Keeper of Secrets.  I am not saying the whiskey is to blame for the finished product, but it probably helped me sculpt and pose the model as quickly as I did.

By the way, this weekend promises to bring another storm to the north eastern parts of the US, so I will be getting lots of studio time in.  I plan to take some w"work in progress" shots of the putty process, in an effort to clarify my experiences.  Stay warm everyone!
Posted by Dan (nyhil) at 11:01 AM