Fateweaver: You Get to Re-Roll What? 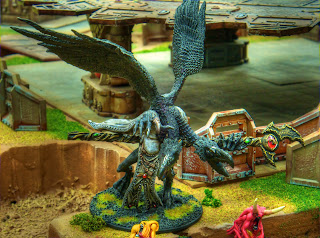 In a world devoid of Games Workshop support, one man decides to weave fate with his own yarn....  Ok, so I wouldn't see that movie; regardless, I would certainly field a Greater Daemon that allows re-rolled invulnerable saves!


While I know that Fateweaver/Fatecrusher has been terrorizing gaming tables across the globe, I can assure you that my own Fateweaver has only seen action on two separate occasions.  Call it lazy; personally, I would like to consider it "reserved".

As with all of my Daemons, I chose to build this model long before the second wave of Daemon models that were released last summer.  While I am in no way displeased with Games Workshop's "sanctioned" Fateweaver model, I needed a Fateweaver of my own.  With two separate Lord of Change kits to steal from, I needed to build a Fateweaver that I could be proud of.  It is true that I still have a 2nd edition Lord of Change model with two heads, but I thought that a model only slightly larger than a Tyranid Lictor was not nearly large enough to represent a Daemon as important and impressive as Kairos, the mighty Fateweaver.

In order to build this model, I started with the standard-issue Lord of Change model.  To this kit, I chose to incorporate some bits stolen from my oft-maligned fantasy Orc army.  After clipping the tail from the ancient Orc Wyvern model, I used both the length of tail as well as the barbed spike to create the neck and lower-jaw of Fateweaver's second head.  To this neck, I added the head from a second Lord of Change model, in an effort to create two similar, yet not identical visage for the mighty Kairos.  These two heads, while certainly similar, provided my conversion with varying necks and lower jaws.  This minor difference gave the model the element of "united dissimilarity" that I was looking for.  Aside from the minor putty work that went with re-positioning the staff, this model was all but complete.

I did spend a bit of time puttying and texturing the connecting joint where Kairos' necks attach to his torso.  Considering the feathered nature of his body, this texturing was not a very difficult process.  After pinning the joint and covering it with putty, all I had to do was use my sculpting tools to continue the textures that were already present on the model.

When I painted this figure, I was in the midst of my experimentation with the PC game Warhammer Online.  In this game, the Lords of Change are depicted with an accent on the "raven" elements.  Black feathers and beak, combined with the striding gait of a greedy carrion.  Therefore, my own work was to be focused on making this daemon appear to be a huge, mutated crow.  As I reflected on this goal, I thought of all the pigeons I see whenever I head into New York city.  Living a mere 20 minute bus ride from Times Square, I regularly have the opportunity to shoo oily-winged rats from my path, and reflect on their unique colors.  These birds typically display an iridescent collar of purple and green, that shimmers with a filth entirely unique to the gutters of the Gotham city.  I thought it would only be appropriate if my own Fateweaver displayed such markings.

After completing the Fateweaver model in the most basic of dark colors, I applied both green and purple inks to the neck and chest area of the model.  These layers were my attempt at recreating the oily patina of a filthy pigeon.  Once dry, I added the final layers of drybrushed highlights to the feathers, to bury these colors in the upper crests of the bird's collar.  In my opinion, the finished color scheme conveys a sort of real-world avian filth, while the model itself depicts an unnatural mutated nightmare.

I hope you get a kick out of my pre-release conversion work.  It's funny: the more I blog on my past work, the more I want to take these figures to a table.  Considering the time I invest on these projects, one would think I am eager to bring my work out to play.  Unfortunately, waking up at 5 am can have a limiting effect on gaming time.
Posted by Dan (nyhil) at 9:12 AM