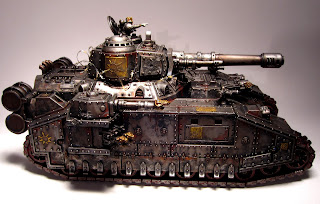 The Baneblade super-heavy tank is often the centerpiece of a proper Imperial Guard collection.  In building my own Baneblade, I wanted to make sure the large-sized model had an appropriate amount of detail to serve as a true “keystone”.
The Baneblade kit is quite large.  I remember opening the box, and being a bit intimidated by the sheer amount of sprue present.  The kit includes a vast amount of plastic components for the chassis of the tank, and also includes a wide variety of optional bits and pieces.  I think the sprue comes with almost three whole crewmember bits, but perhaps only one set of legs.  Regardless, this was a serious kit! 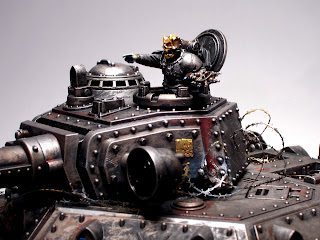 My first issue with the model, was the removal of all imperial demarcations.   While it was easy enough to carve and dremmel the eagles from the hull of the tank, the treads of the vehicle were also inscribed with the imperial aquila.  Luckily, a solution was not far off:  I am not sure if this is intentional or not, but by simply affixing the tracks “upside-down”, the imperial symbols could be hidden, while the treads themselves could take on a much more sinister appearance.  You will notice that the treads on my tank are exceptionally knobby and rough, which would be all the better for traversing the mud and gore packed battlefields of Vraks.
After the imperial demarcations had been taken care of, I wanted to give the vehicle a strong chaos flavor.  In addition to the assortment of etched brass I wanted to apply, I made sure to replace a variety of gun barrels with gargoyle heads from the chaos vehicle upgrade sprue.  I made sure I drilled-out these gargoyle heads, to retain some semblance of functionality.  I recognize that both the hull-mounted demolisher cannon, as well as the turret mounted main gun could have taken some embellishment, but I chose to leave those weapons standard.  As I have said before on this blog, I feel as though it is very easy to go “over the top” with a warhammer kit.  Just because you have 40 extra skulls, doesn’t mean they ALL need to go into your next conversion. 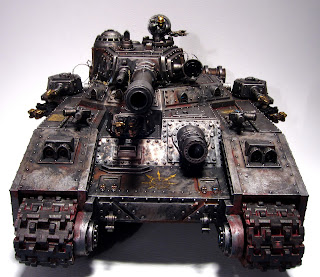 For the tank commander, I used the torso of a Vraksian Militia Enforcer, just like all of my squad leaders.  I gave him the pointing arm from the Baneblade crew sprue, and put an auspex scanner in his left hand.  I imagine him receiving targeting co-ordinates from the scanner, and commanding both his Baneblade as well as surrounding support vehicles to direct their fire at a specific location.  The wild eyes and screaming death-mask of the Enforcer model makes this all the more threatening.
As with all of my vehicles, I wanted to incorporate some element of barbed wire.  Seeing the exposed tank commander, I tried to imagine how best to defend such an obvious weakness.  To discourage assaulting enemy troops from attempting to climb the hull and shove grenades and demolition charges into the commander’s hatch, I made a ring of razor wire around the turret. 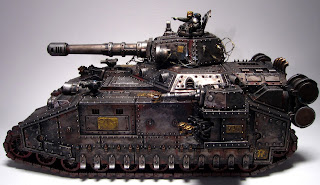 Aside from these minor alterations, this is generally the GW Baneblade kit.  I honestly like the model, and have considered building one or two more variants.  Two super-heavy tanks seems like a very quick way to add a thousand points to an army.
I hope you enjoy seeing my Baneblade.  With this post, I have fully documented my Vraksian Militia, as it stands at this time.  While I have not displayed every model and variant, I have presented at least one photo of each unit and vehicle type in the collection.  Over the next few weeks, I may have the opportunity to photograph the army as a whole, but then I am not entirely confident in my abilities to take a satisfactory photo with such a large depth of field.  I am only just now becoming confident in my ability to photograph single models.  Alas.
Wish me luck with my “group photos”, and take heart:  there will be many work in progress pics of my Kabal of the Fursaken in the near future.
Posted by Dan (nyhil) at 9:16 AM