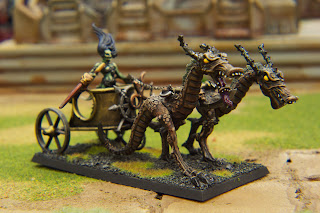 Sometimes winning an eBay auction for random assorted bits, is all the motivation you need.

A while ago, I was scouring eBay for out of print metal chaos bits.  I knew that both my Chaos Daemons as well as Emperor's Children collections could benefit from some "old timey" flair, so I kept an eye out.  I won two assortments of OOP chaos bits for roughly $20 each, and found not just lead-based metal models, but also inspiration.

The chariot you see above uses the plastic Tomb Kings chariot as a base.  The front of the chariot is adorned with a Slaaneshi icon from the Chaos Space Marine sprue, and the driver is just a standard plastic Daemonette model, adorned with some "champion" bits for some extra flair.  The two Steeds of Slaanesh, are from 2nd edition.  While these older Steed models are not nearly as sleek or interesting as the 3rd edition versions, I was lucky enough to get 7 of them in one of the OOP bits auctions I had won, so I thought they would make this chariot stand out from my other mounted Slaaneshi units. A bit of jeweler's chain, and this chariot was complete.

I wound up making two of these models, and had a very easy time making them. 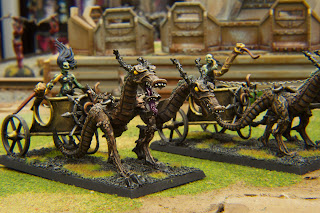 It seems as though Heralds mounted on chariots are finally getting the in-game attention they deserve.  The Chaos Daemons book allows you to field up to 4 of them in a standard game, and these multi-wound, eternal warrior, invulnerable save HQ choices can be bought for as little as 65 points each.  I would think Games Workshop could take advantage of this appeal, and provide a plastic kit of their own.  Perhaps they just expect people to be a bit more creative.  Too bad eBay and a seller got my money, and not GW.

Short post today; a bit busy this week.  I finally got to spray prime all of the terrain I had posted up Monday, and I hope to get a coating of wood stain on the collection by tonight.  My Kabal of the Fursaken project has begun gnawing at the edges of my work desk, and to that end, a preliminary mock-up for my Ratway portal has taken shape, as well as my modeling work on about 50 combat-drug injectors.  I also just saw the Warp Lightning Cannon / Plagueclaw Catapult model GW just released, and I am analyzing the sprues for possible conversion bits...
Posted by Dan (nyhil) at 11:07 AM