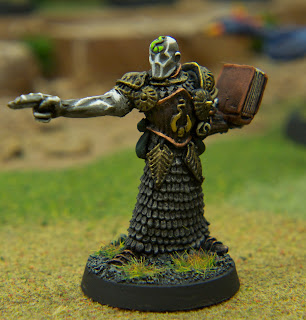 The Tzeentchian special character known as The Changeling, received a model this past summer.  The model pictured above, was my own take on the daemon from before that 2nd wave release.

The model I used as a base is a Tzeentchian sorcerer from Warhammer Fantasy, I believe from first edition.  I say first edition, because this model is depicted in the fabled Realm of Chaos books.  Regardless, it's an old figure.  I liked that the face of the model is totally blank, giving The Changeling the "blank slate" look, which is fitting considering his ability to morph and shift into the appearance of whatever he is fighting.

After removing the figure from the old school velvet-lined Disc of Tzeentch, I decided to remove his right arm.  The model was sculpted with a large mace in his right hand, and a book in his left.  As I have stated before, I have a soft-spot for models holding books, so the tome had to stay.  After clipping the mace-arm off, I needed to find a suitable replacement.

Picking through my bits box, I found the remnants of a C'Tan Deceiver model, and thought that his pointing arm was pretty ideal.  The gesture was quite fitting for a sorcerous daemon, and the scale of the arm was JUST long enough to look a bit strange on the figure, which is perfect for a doppelganger like The Changeling.

You may be asking why I would have extra Deceiver bits laying around.  I had used the Deceiver as a basis for converting a trio of Tzeentch Damon Princes, which I will be sharing with you all on this blog shortly.  In retrospect, I should have used the Tomb Kings Ushabti models, but that discussion is for another day.

Short post today; I blame holiday stress and activity.  It probably doesn't help that my left hand is bandaged at the moment, due to a hot glue gun mishap last night.  Also, I need to pick an army to bring to the Conflict GT in January, so suggestions are welcome.  Maybe I will see some of you there.   Either way, happy holidays!
Posted by Dan (nyhil) at 9:43 AM