A Khorne Daemon prince, or, How to Plunder Your Failed Army Collections 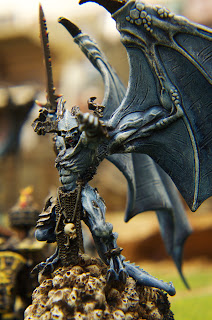 We all have a "box of shame", filled with miniatures long since abandoned.  Projects that never got past the 30th page of a codex, or a half-painted HQ choice.  Is there no salvation?  Is there balm in Gilead?

Back in the mid 90's, I came into a fairly large Orcs & Goblins army.  While I never really used them for fantasy, the models themselves became the wild test subjects and bits farm for years to come.  Whenever I needed to test a new wash or tone for something, one of my 200 primed-white night goblins got a new paint job.  Each time I needed a power weapon for a squad leader, a black orc lost a two-handed axe.  See where this is going?

As I fleshed out the Khorne branch of my Daemon collection, I wanted to make at least one daemon prince.  I had already picked up a Be'Lakor model, and wanted to use it as a foundation.  While I liked the figure, I thought that it needed to have a much greater presence on the battlefield.  Also, I was not a big fan of the model's wings, so I removed them and wound up using them on a more lithe Slaaneshi Daemon Prince (teaser teaser!).  That meant that I needed to find a way to increase the size and stature of the Be'Lakor model.

To icrease the height, I grabbed an Armorcast skull pile, sawed it in half (with a gas mask on; thank you bleeding lungs!), mounted it on a GW base, and pinned Be'Lakor's now-bent feet to it.  This gave the model the look of being perched atop a heap of battlefield trophies.

Next, I poked around in my Orcs & Goblin Crypt of Shame, and found a disintegrating 2nd edition Wyvern, whose head had already been donated to a Fateweaver conversion.  I promptly pulled the wings off, and began shaping, pinning and puttying.  An hour later, I had some pretty beastly looking wings protruding from Be'Lakor's back.  I liked the size increase, as now the wings appreared to have the actual lift necessary to pull such a stout daemon into the air.

I remember as a child, watching the Night on Bald Mountain portion of Fantasia.  I couldn't believe how large the big daemon's wings were!  The image stuck with me, and I suppose this was the end result.  While not the best photo, you can see a better "full figure" image of the finished product on the top right: 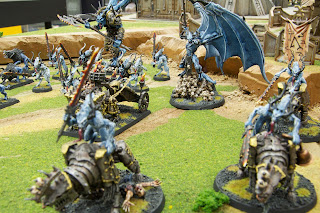 I was glad to have treated the daemon prince with the gravitas it deserved, and I was happy to find a use for the Wyvern wings.  I guess now I should go back to my studio, and find other candidates worth redeeming from my Box of Shame...  And yes, Abbadon, I am looking at you...
Posted by Dan (nyhil) at 10:37 AM