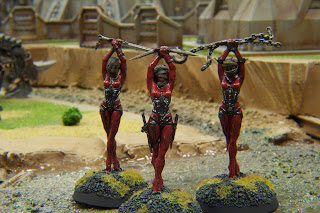 Damon Princesses with bandaged faces and razorblades?  Luckily we have the Inquisitor range!


Continuing the theme of Hellraiser/Silent Hill, I wanted my Nurgle non-winged Daemon Princes to evoke a "Wyrd Sisters", or even Stoker-esque trinity of female evil. These Inquisitor models were perfect for the scale and appearance of female Daemon Princes. The models come two to a pack, so with two boxes, I was able to create three Nurgle Princesses, and still have the basis for a pretty sweet Slaaneshi Princess. More on the Slaaneshi Princess in a later post...

Due to the similar poses, I wanted to be sure that the three sisters would have a varied appearance. An easy and straightforward way to alter the profiles was to modify the weapons. The original kit comes with a pair of daggers for one model, and a straight sword for the other. I thought the daggers were an acceptable option for one princess. The next model, the one with the sword, proved to be a bit more challenging. I flattened the very end of the sword by clipping and filing the edge flat, and drilled directly into the sword. To the tip of this sword, I pinned a bladed hook from the corpse cart sprue. This gave the sword a story, and suggested a menacing "disemboweling" purpose.  While not a wonderful pic, you can see the detail of the sword better here, on the left-most Princess: 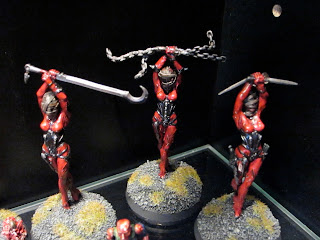 For the last princess, I replaced the daggers and pinned on a pair of extra bloodcrusher chains. I twisted these metal bits to suggest motion. These three weapons seemed both dangerous and varied enough to satisfy my aesthetic.

When it came time to pin the heads onto the models, I had a decision to make:  Do I try to add the bandages after the head is fixed, in an effort to focus on the overall look, or add bandages before putting on the heads, and risk getting the scale and placement incorrect?  I opted for the latter, as I assumed that the random nature of the bandages would not necessarily be a negative element.  First, I cut many thin strips of paper to serve as my bandages.  One at a time, I soaked each strip in zapp-a-gap superglue, and then proceeded to wrap the heads and faces.  I tried to make sure all three faces were wrapped differently, and I also tried to incorporate both horizontal as well as vertical lines in this process.

While not entirely "nursey", I think I did a good job of capturing the idea.  There is something mysterious about such a beautifully proportioned female form, combined with the suggestion of self-mutilation.  I wanted to add some barbed wire at this point, but everything I tried was just "too much".

In the aesthetic world of Warhammer, I think it is very easy to go overboard.  Yes, I get the irony of me saying that, considering the absurd models I build and paint.  However, always, at some point I take a step back and restrain myself.  It would have been easy to pin skulls all over my Vraksian Militia's tanks.  It would have been easy to add green stuff tentacles, and chaos spawn sprue bits to every daemon model I built.  I think it is important, in this Grimdark hobby of ours, to remember not to lose focus.  Build towards an idea, and when you reach that goal, have the courage to say "Enough".

Considering my hobby it may be heresy to say this, but more skulls don't always make things cooler.
Posted by Dan (nyhil) at 5:31 PM