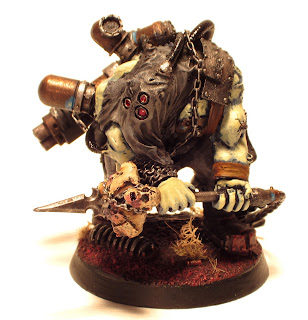 Everyone knows that Ogryn are not a competitive unit choice.  It's really too bad, because the Forgeworld Renegade Ogryn models are fantastic!

Lately, I have been working to finish off the remainder of my Vraksian collection.  The units that remain are not competitive choices on the tabletop, but are certainly great figures.  The Forgeworld Rengade Ogryn Berserkers are some of my favorite models of all time.  I use a set of these figures for my "Beasts of Nurgle", as well.  However, in making this group of models, I wanted to be true to the theme of an Ogryn squad chosen from the Imperial Guard codex.  That meant they would need ripper guns, grenades, and a transport.  The grenades were an easy addition.  The others?  Not so much. 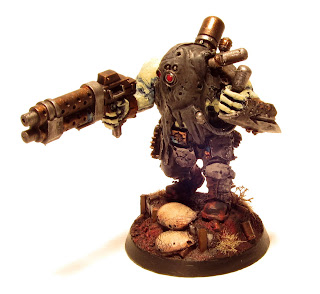 As you can see, I have removed the cross-bar that this model was originally weilding, and modified the pose.  I gave his left hand a canister to hold, and sharpened his arm-guard into a formidable weapon.  This justified the raised position of this arm.  In his right hand, I have pinned an Ork big shoota, while leaving the lower portion of the coss-bar to serve as the grip.  Positioning the right arm took a bit of puttying, as the shoulder had a large gap.  It was easy to simply follow the lines suggested by the model's sculpted mucles, and create a smooth profile.

The other 5 models in the squad, are also carrying ripper guns, however, I did not place the guns in their hands.  I used jewelery chain to sling the big shootas onto their backs (look at the picture at the top of this post), in an effort to portray a group of rampaging psychopaths, far more interested in impaling their foes on a piece of scrap metal, than shooting them at range.  Lovely!

Going back to the model portrayed in the first picture of this post, you may notice that his melee weapon has been converted.  The model was originally holding a large hammer, which can be seen here.  While I like the hammer, I felt that this model began to look too much like one of his squad mates: 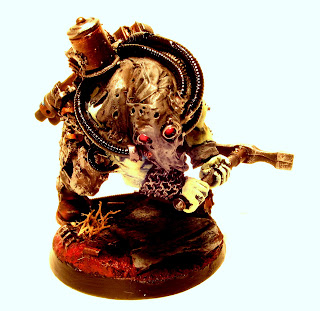 Therefore, I removed the base of the hammer, and replaced it with a gory body bit I had leftover from my Forgeworld Herald of Khorne kit, and suck an old nightgoblin spearhead onto the torso, to make him look like an impaled trophy.  I then replaced the hammer-head with some hook-tipped chains from the Chaos Marauder horseman sprues, which I had leftover from my squad of Rough Riders (again, with the teasing).

I love these figures, and I wanted to do them all justice.  It is certainly a strange feeling to pay top-dollar for a Forgeworld item, then cut it apart... however, I felt that to leave the squad as-is, was to deny the figures the aesthetic glory they could achieve.

I will post pictures of both the converted transport I made, as well as the other three members of this squad in the future, as well as the conversion I made for Nork, the Ogryn bodyguard.  Which brings me to my final point: photos.

The photographs I used in this post were taken with my girlfriends point-and-shoot camera, in a lightbox I built in my attic.  I have virtually no experience taking digital photos, and I am quite at a loss as to what to try next.  I am generally happy with the first two photos posted here, but the third?  Not so much.  I would appreciate any (constructive) criticism you have to offer.  I still have lots of professional-quality pictures taken by my friend Chris Scrivens, but I would like to be able to shoot my own work as it is in progress, so I can share the many steps I take along the way.  Something tells me my iphone just won't cut it...

Thanks again for checking out my blog, and I hope the amateur quality pics I used today don't offend anyone's artistic sensibilities!
Posted by Dan (nyhil) at 9:04 AM