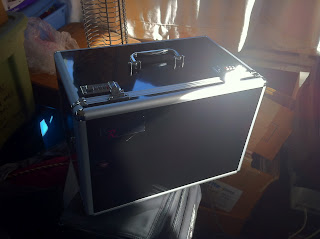 I recently  conducted business with KR Multicase, and couldn't be happier.

In preparing my "Aliens" themed army for transit, I decided to order a case from KR Multicase.  In dealing with the company, I found them to be extraordinary.

Rather than fight through a wonky custom foam cutting app, I wrote the company an email with a list of models I hoped to transport.  Within a day, I received a response instructing me exactly which case and foam to order.  I placed the order, which was truly reasonable, and shortly after found the case at my door.  Sadly, the case had been damaged in transit. 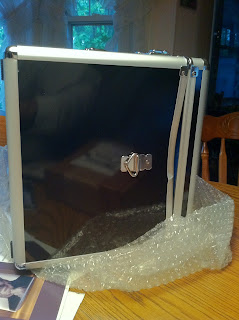 After writing back to the company with photos of the damaged case, they sent me a replacement withing days.  I am now the proud owner of a "double" sized aluminum case, with enough foam to carry 3k point worth of tyranids.  All for roughly $130, which I find to be a worthy value.

They first few KR products I saw in the field, consisted of foam packed in cardboard.  I was a bit hesitant to purchase a cardboard case, but these aluminum cases seem more than adequate for the transport of an army.  I like that the cases have locks incorporated, and the overall appearance is all business.  For the first time, I feel confident enough to use a miniature case for air travel.  I know that battlefoam produces a case made for carry-on transport, but then a friend of mine traveled with one and found that it was actually too large to be stowed in an overhead compartment, and had to check the bag in with the rest of the luggage. This is not what you purchase an "air-pack" for.

I am happy to report that with this KR product, I can safely bring an army on a plane, without worrying about losing the case in the luggage return.

I know this post sounds like an advertisement, and I suppose it is.  I cannot recommend KR Multicase highly enough.    Even with the damaged original shipment, the company made the order right in no time, and the end result is exactly what I wanted.

I could at this point post a photo of the damage I did to my hand this weekend with a brand new exacto blade, but I would like to keep this update positive.