Wyrd Miniatures has set a remarkably inspiring standard with the art direction of the new edition of Malifaux.  To honor the new edition, I have been toiling away on a new table.


I started with a 3'x3' latex mat, purchased from ZUZZY Miniatures Wargaming Terrain. 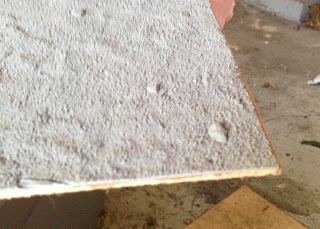 The sheet comes pre-molded with a variety of surface details and features, while retaining a mostly-flat surface.  The natural latex was glued down to a 3'x3' sheet of masonite, using watered-down Elmer's wood glue.  I had to work trapped air out from under the latex mat during this stage, to assure a tight grip as well as prevent future tearing.

Next, I airbrushed the natural grey of the latex, with a dappling of purples and greens.  I planned to color the board with predominantly warm colors, knowing that the cobblestones, graves and buildings will be built with cool tones in mind.  Regardless, this smattering of purple and green was to begin with a varied foundation, representative of the organic, natural world. 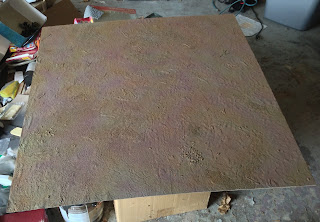 I next applied a variety of thinned-down washes.  Some, like the inevitable "devlan mud" treatment, were thinned out and washed over the entire surface.  Other tones, such as sepia and chestnut, were applied in meandering paths, as well as outlining the sculpted roots and rocks.  After, I returned to the airbrush with alternating shades of brown, going first with a light tone, then with a dark to cover specific patches, for even more variation.  Working such "natural" dappling with an airbrush is exceptionally easy, but difficult to explain.  Your eye notices a "vacuum" of pigment in an area, and a steady, patient hand with the airbrush can almost go on autopilot.

After drybrushing a few small, subtle patches of khaki onto the dirt, I began to pick out the sculpted details with specific colors and treatments.  Streaks of ink in the grain of the wood, and a few irreverent purple and green washes to spruce-up the grey stones.  I also began to add patches of dark green flock, as well as leaves. 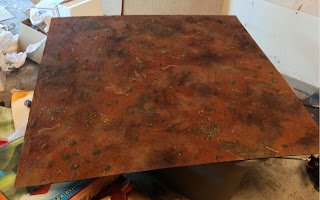 Working with seed-pod leaves, is an exercise in patience.  I first grasp the edge of a pod leaf with tweezers, which is no small feat.  I next dip the underside of the leaf in a spot of Elmer's glue, and steadily apply it to the latex board.  I had to be careful to position the leaves in such a way that they would not easily lift or peel off. 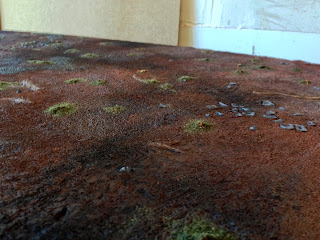 I took a break from leaves at this point, and began experimenting with a bit of weathering powder.  By brushing-in some brown and black powder, then dragging the pigment out, I was able to add even more "natural" looking shade to the surface.  This was followed by a layer or two of Testor's dullcote. 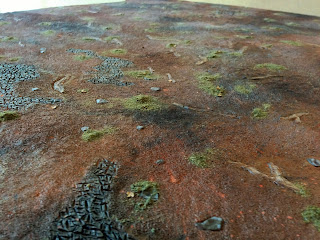 I went back to the leaves, and added a mind-numbing number of them.  I still want to add more. 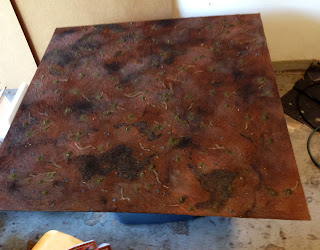 Now that the surface is complete, I am excited to get to work on the terrain set.  I can only really tell if I have achieved enough variation, when the board is populated with painted accoutrements.  I will be sure to post photos as this comes together.

One more time, if you squint, and imagine all the wrought iron and twisted trees... 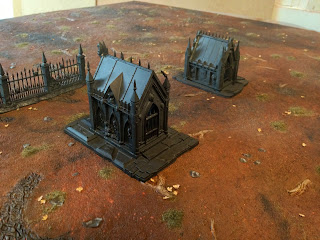 It's going to be spooky!