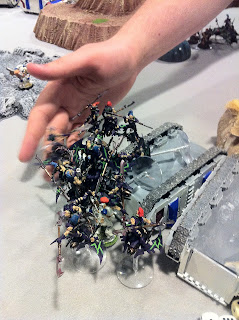 I think my recuperation after the NOVA Open event would have been easier, had I not returned to the aftermath of a hurricane.  4" of water in my basement, as well as a lack of electricity, made for a very strange post-tournament funk.


At the NOVA, I met some great people and opponents, had a variety of challenging games, and saw some beautifully painted armies.  The Cobra themed IG army that won best painted was gorgeous!  The theme of including specific G.I. Joe characters was executed very well, and gave the army a truly distinct feel.  The display board that Jawaballs presented included music and chants, which elevated the atmosphere of his already beautiful work.

I was also lucky enough to play on table 1 on Saturday, which meant my game was broadcast on the ustream channel.  Unfortunately, the video was lost due to some sort of hiccup, but the experience was memorable enough.  My opponent on that game was a guy named Jamie, who played a blue and orange Tyranid army.  He was a great opponent, and we had a fun game.

As for my record, I wound-up with 2 wins, and 6 losses.  Considering I had only used the codex once before the tournament, I am thrilled with my performance.  I learned quite a bit over the course of my 8 games.  The biggest challenge I had, which I saw coming, was dawn of war deployment.  Considering the "webway-bomb" direction of my army, that deployment proved to be quite tough.  I have discovered a solution, and I look forward to putting some new plans into action during such a mission type.

At the end of the event, I learned that my army was considered for a best appearance award, and I was both surprised and honored to see my work on the finalists table.  I find it incredibly satisfying, to know that I am not alone in spending such an absurd amount of energy on toy soldiers.  I just wish the lighting in the venue was more conducive to photography, as I could look at photos of those other collections for hours.  Maybe some pics, with a quality higher than that of my iphone camera, will surface on the internet.

In closing, I would just like to say thank you to the event organizers for all of their hard work.  I hope that I was alone in trying to sleep off the post-tournament "hangover" while cleaning-up flood waters.

With school starting soon, I will have far less time to paint and build.  Perhaps I should work on smaller projects, like a few Malifaux crews I have been fiddling with.  Then again, those 6 land raiders are calling to me...