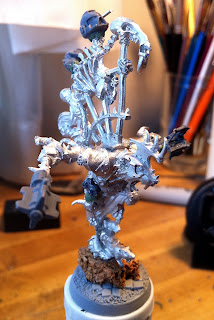 Creating a Skaven based Asdrubael Vect was not very hard.  Perhaps because GW has yet to produce one of their own, so there were no limitations...  And no, a model stuck in a vehicle doesn't count.  =P

As I looked through the range of pre-existing Skaven models, I thought the Queek Headtaker figure would be a perfect representation for the ruler of Commorragh.  The dynamic pose made for some easy weapon-swaps, and the height of the model provided some extra bravado and really allows the figure to stand out in a crowd.  The large trophy rack on his back was an interesting detail, and allowed me to replace some fantasy-themed trophies with a collection more suited to the 41st millennium.  Here, you can see my addition of an Imperial Guard head, perhaps collected from a Planetary Defense Force platoon sent to purge the depths of a hive world.  I used an empty Cadian helmet, and a special weapon command squad head to achieve this bit's appearance.  By continuing the scar on the model's face through to the helmet, and providing a tiny bit of puttied "gore" to the neck area, the aesthetic came together nicely: 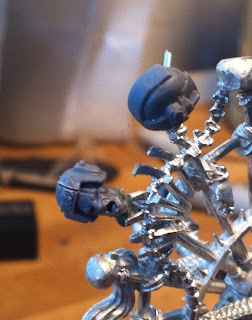 The second trophy that I added was of the Astartes variety.  While many models have in the past displayed a variety of heads and helmets, one detail I often see neglected is a bit of narrative concerning the trophy's acquisition.  After picking a suitably "standard"  Space Marine helmet, I drilled-out one eye socket, and added a short piece of paperclip wire to represent a dart.  With all of these models armed with hand crossbows (splinter pistols), it is only logical that a space marine's armor could fail in such an obvious, and painful way: 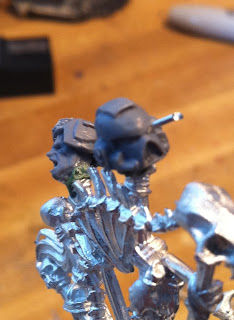 The splinter pistol conversion I had used on my wyches was easy to repeat on this model.  I also added some putty to an IG grenade pack to give the figure his "Obsidian Orbs".  For the "Sceptre of the Dark City", I simply replaced the axe blade of Queek's weapon witht he head of a Space Marine terminator power-weapon.  I plan to paint the "core" of the sceptre's head like warpstone, with the blades holding the core in place.  I have yet to decide if I want to add a skaven bit to the very tip of the sceptre;  While it would push the appearance away from Imperial and towards my own army's look, I wonder if it would make the weapon too long.  Maybe I will shorten the shaft of the sceptre to compensate. 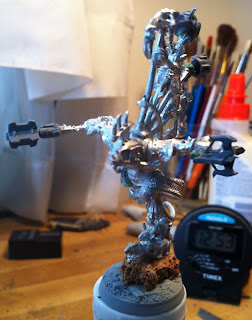 Regardless, these last few days have been very productive.  Aside from drilling-out the barrels of my Blast Pistols, all of the infantry are now fully built and converted for this army.  That leaves the Dais of Destruction, two Ravagers, and nine reavers.  I spent some time last night dremmeling the Ork pilots from Deffkoptas for my reavers, and while time consuming, seems entirely reasonable for the conversions.

When I get on a hobby roll, it's hard to slow myself down.  Aside from breaks to play Left 4 Dead while my studio clears of glue fumes, It has been all business around these parts.  Well, I suppose two snow-days will help with that, too.
Posted by Dan (nyhil) at 10:24 AM