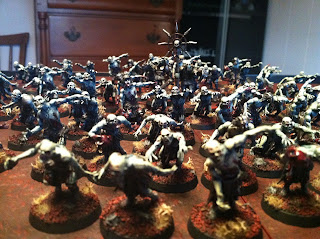 I was recently inspired to work on a 90 model block of conscripts for my Vraksian Militia, and thought I would share the results.  While I have painted plenty of zombies in my day, I have developed a soft spot for this horde in particular. 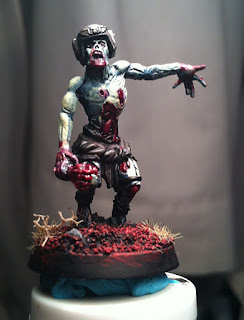 As you can see, I have broken away from the Games Workshop zombie sprue, in favor of the Mantic Games Zombie box.  While the variety of poses Mantic provides are more limiting than the Games Workshop product, I found the models to be easy to work with, and simple to convert.  I also found the poses that Mantic chose provide a greater sense of movement within the unit, whereas the GW zombies tend to look more like action figures to me.  Considering the low cost of Mantic product, this was a fine component to work with.  I added a few GW helmets and bits throughout the horde of zombies, more for variety than to indoctrinate these figures into the ranks of the GW monstrosity... 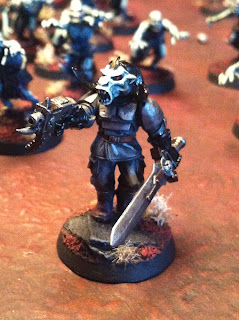 In order to run these unarmed conscripts in my traitor IG army, with the "without-number" manner that zombies deserve, I had to have a model to use as the Chenkov special character.  I used a basic Cadian torso and legs, with basic Chaos Space Marine arms, and a Beastman head.  Pretty quick and easy mock-up for a carapace armored figure. 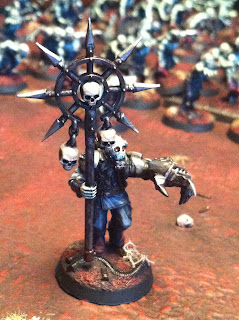 The last model I finished in this batch, is this standard bearer you see here.  I plan to use him as Kell, the special character banner bearer from the IG codex.  That should explain the power fist.

Here is the list I plan on running these models in:

2000 Pts - Imperial Guard Roster - The Lost and the Damned

The basic concept behind adding these units to my Vraks collection, is to allow for hordes of bodies to bubble-wrap my tanks, with Chenkov allowing me to recycle any zombie conscript hordes that are wiped out, or I CHOOSE to remove for that matter (as per his special rule).  Between Creed and Kell, I should be able to order my army, as well as these two huge units, in some interesting ways during a game.  It is true that my zombies are not modelled holding lasguns, and as I have said in the past, that is because they do not have lasguns.  What's the harm in a little sacrifice, if it means your army comes equipped with atmosphere?
Posted by Dan (nyhil) at 6:51 PM