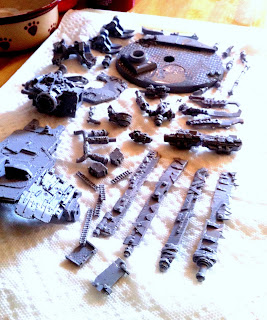 Spring Break at last, and yet the only wet t-shirt is my own...


I have been away from both my blog and the hobby for about 1.5 months now, and the hobby bug has returned in full force.  With my eye largely healed, and a week-long reprieve from the demands of running five classes a day, I find my fingers crusty with glue, my nostrils clogged with resin, and my models returning to the battlefields of the 41st millennium once again.  Albeit with some serious codex reference.

My Kabal of the Fursaken Skaven/Dark Eldar army is nearing completion, as far as the modeling portion goes.  I spent Sunday cleaning and grinding the resin of my Chinnorks: 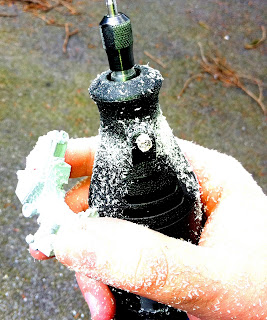 ...and as you can see from the first pic on this post, the resin has since been thoroughly washed and cleansed of mold-release.

I have a bit more slave-labor AHEM "student-driven power-tool work" to be done, but I honestly can see this collection being fully built by the end of April.  With a few weeks spent testing paint-schemes, I am right on target for finishing my army in early June, which would give me a few weeks to practice the codex.

What has my break taught me?  A few things.  First of all, my focus on my own hobbies has always been of a cyclical nature.  Last year, I built and painted three 2500 point armies between January and May, then spent all of June playing Red Dead Redemption.  I promptly returned to my studio in July, built my Battle for Salvation Vraksian Renegade Militia army, and painted it in another four weeks.  These breaks are nothing new.  I think the only real difference here, was that I had been blogging my progress and work, so my shift of hobby was more clearly documented.

Does this mean I am back to blogging here three times a week?  I doubt it.  I have been writing a semi-weekly blog post for Blood of Kittens for a while now, and I think I like that as a regular output for my hobby thoughts.  As far as my own Ten Inch Template, when I have something worth sharing, I will brag here first, regardless of when that is.

Wish me luck as I return to my resin.  My Super Mario Bros. t-shirt is damp and clingy from washing resin, and now it's time to get some fresh glue on my hands.

LASTLY:  The good folks over at The Battle for Salvation in White Plains, New York, have already begun the pre-registration for their October tournament event.  I had a blast at the event last year, and I am sure that this year will be even better.  I will certainly be there, and I hope you guys support their event as well.
Posted by Dan (nyhil) at 3:17 PM