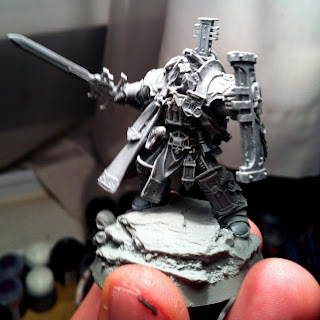 Out of all the models I built this past weekend, this one has truly captured my attention.  A Forge World model from the Siege of Vraks campaign, Inquisitor Hector Rex is going to be leading my paladin wing army, running with the rules for Draigo.  It's funny how the model's wargear matches Draigo's so perfectly.  While I have yet to work with a single finecast model, I will forever be captivated by Forge World's product line.
I also built a variety of pewter Paladins this weekend, each taking quite a while due to all of the pinning.  I also based three resin servo skulls, and I am pleased with the effect: 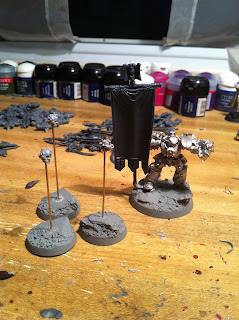 In addition to a pile of paladins, I also worked on my heresy-era Emperor's Children.  First up, is a small conversion I made to the Sigvald the Magnificent model.  Because the model will be run as a Librarian spamming "Shield of Sanguinius", I removed the slaanesh runes and shield, and replaced the left arm with a forearm from the Dark Elf corsairs sprue, and the menacing hand from the ghoul sprue.  While the model has many more minor conversions to go, I am pleased with the direction it has taken so far. 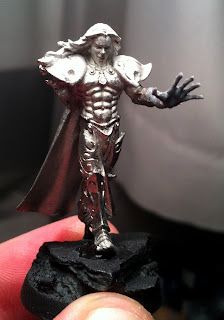 I have also been working on the remaining assault marines.  I am working with the standard-issue "Tac Squad" sprue for the first time, and I am floored by how poor the models are.  While a good 1/3 of each model consists of pewter conversion parts, the original "Tac Squad" parts are both lacking in detail, and covered with mold lines.  The areas around the power armored knees and ankles are particularly heinous.  It is taking a bit longer than I had originally expected, but progress has certainly been made: 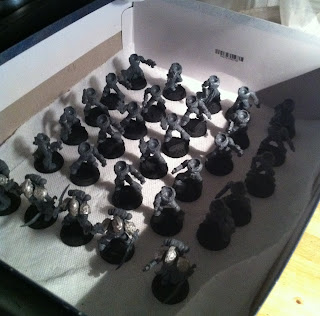 All in all, I got a lot of modeling done over two days.  It is a bit strange to be building two armies at the same time, but each project is so small, I do not feel too stretched-out.  Once built, my Emperor's Children will have to be shelved till next month, when Army Painter releases the alien purple primer I plan to use.  That said, I have been thinking about how I want to paint my Draigo-wing.  I like the idea of painting them in a color, as opposed to a metallic.  At the moment, I am toying with the idea of painting them in a ceramic ivory, with gold trim.  I'm not sure what accent colors would fit, but I know I will need at least two; one for the heraldry, and one for the blades of the force weapons.

It feels good to be creating again.
Posted by Dan (nyhil) at 7:19 AM